The fundamental activities developed by the serdianesis today are still the agriculture and the breeding. Serdiana today, even using modern systems has maintained its characteristics of a rural community, despite has been partly conditioned by varied phenomenons, common to the agricultural realities , as: the exodus from the countries, the agricultural mechanization, the emigration toward the city. Subsequently in the territory different firms have risen, in part driven from family management, agrarian, and finalized to the production of wine and oil, and house building. The prevailing and remarkable cultivations, are paricularly those of the grapevine and the olive oil. 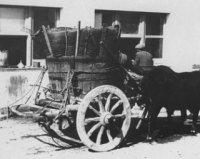 Grapevine, table grapes, for varied types of wine: Nuragus, Monica, Vermentino, Malvasia and Muscat. The wine production is therefore mostly destined to the wine firm. In fact almost all the farmers possess a wineryr, so that the grapes are worked partly at family level and partly in big complex wine-plants like the Argiolas, the Pala and the Dolianova Social winery, that acquires the primary product.

After the production of the wine follows the crop of the olive-oil, in these last years in phase of expansion and whose production is destined mostly to the oil firms. Also the olive-oil productors practise the double channel of marketing: the sale by therself of the oil and olives, and to the cooperative of Dolianova and the Agriser.

Another diffused crop is that of the citrus fruit; the sector of vegetables-fruit cultivation is also in phase of development through the organization of the crops in greenhouses.

At the end ther is another very diffused crop: The breeding, with the greatest number of animals s is that is the ovine (expecially sheeps); than follows the goats and beefs. Thanks to the breedings of these animals there is a great production of milk, destined partly to the dairies of Dolianova and Donori and partly to a cheese production at family level of typical products as the pecorino cheese and the ricotta cheese.

Mostly at domestic level, we have a raising of courtyard animals as rabbits, chicken and pigs. Even horses are raised , and his production is finalized not for the meat but for the horse run and the folkloristic shows

Very important, for the economy of the Town, the existence of a checked dump (ECOSERDIANA), that is surely far from those that are the traditional activities, but offers occupation to a part of the population (around 45 people). The dump is located in an old quarry at 5 Kms from the town. The refusals, with the time, are used, because the go through a process of natural transformation, becoming, in ten years, “Humus”. The same, fermenting, pass through another biological trial, turning into bio-gas that is turned into electric energy, sold to the ENEL (Electrical Company).