We don't have precise news on the historical origin of the center of Serdiana, the varied hypotheses that take place  are based on the recovery of different archaeological material during the agricultural jobs. In the near countries  lithic objects have been found  to testify the first neolithic installations . The same excavations, performed in the proximities of the rural church of Santa Maria of Sibiola, where tools and other objects were recovered, document the human presence since the prehistory, as well as in the  nuragic period, in  fenicium-punic period and, subsequently, for the whole Roman period. 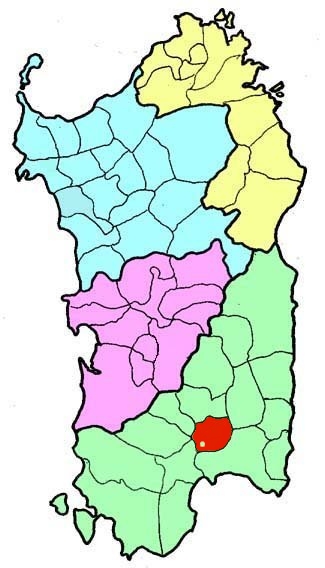 From the XI century Serdiana belonged to the judicature of Cagliari and was included in the Vicarate of Dolia o Parte Olla, passing to the Count of the Gherardesca. After 1257 the judicature was dismembered and it was attached to the kingdom of Arborea subsequently was  given in feud to the Bollaixes untill the 1297, year in witch was surrendered to the Commune of Pisa. In an old pisano's register  dated the first years of Three hundred, we found again Serdiana, called  “Villa Sidriani”; from the data found it seems it was a small village that annually poured a quota of six libre to the Commune in equivalent Pisa money, ten money for the right on the wine  production, 54 starellis of wheat and 42 of bowline. (*). In the 1323 Serdiana passed to the Aragonesis, that subdued Sardinia leaving intact only the judicature of Arboreal. The conquered territory was divided in feuds. Serdiana, together with the other villages of Ussana, Siserri, Turris, Bacu and Jana and to some destroyed or uninhabited villages, was granted, in 1328, to the noble Clemente Salavert.
When in 1358 the aragonesis made the census of their feuds, Serdiana results a possession of R. de Monphao or Raimondo of Mont Pavon, to which the inhabitants poured a quota of tax that exactly corresponded to the one versed  in precedence to the Commune in Pisa.
It seems that in that period Serdiana was completely depopulated because the plague and  the difficulty caused from the famines and the wars.

In 1440 it passed to the Tomiches under which counted 26 fires (families) with the name of Sardiani . It belonged later to the Mora in 1544 and ten years later, to the Gaspari-Porcellas ...then following it belonged to the Fortesas. (In medioevales epoch in the territory of Serdiana rose numerous other villas: Balardi, depopulated already in 1455; Bacu, Modulu and Turri de Casu, all abandoned ones).

Last vassal of Serdiana was the marquise Donna Giovanna Carcassona Brunengo. For the ransom of the marquisate, the Commune paid 3.388 Sardinian Liras.

As it regards the origin of the name, the researchers are not in agreement. There is who hypothesizes a derivation from the fenicium root “SARED” that means red, from the color of the existing clays in the zone, there is instead who sustains that the ancient place-name would derive from “Sergius” a rich Roman patrician “cives”, whose agricultural possessions would have given origin to the first nucleus from which then the Town developed with the name of “Sergiana.”

(*) R. Solinas “Feasts and festivals of the Parteolla”

In the urbanistic context of the historical center, we find one of the most important structures of the town: The Roberti's Castle 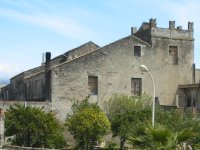 The Castle dates back to the XVIII sec., belonged to the feud of the Villa of Serdiana in concession, from the Kingdom of Sardinia with the title of "Marquisate of St. Saverio" to Efisio Luigi Carcassona, from Alghero, whose nephew married the Count Edmondo Roberti of Castelvero (Piemontes noble, impassioned archaeologist).
The building introduces two side embattled towers; to the center of the housing residence articulated on two floors: buttom floor (day zone) and first floor (night zone).
The coat of arms, that still remains  on the principal front door that gives the access to the building, is to be attributed to these last owners.
The last Marquis sold the Castle one to three continental agriculturists: Vandoni, Muzzioli and Rastano, from which, Francesco Angius (father of the actual owners) after 18 years of lease acquired.